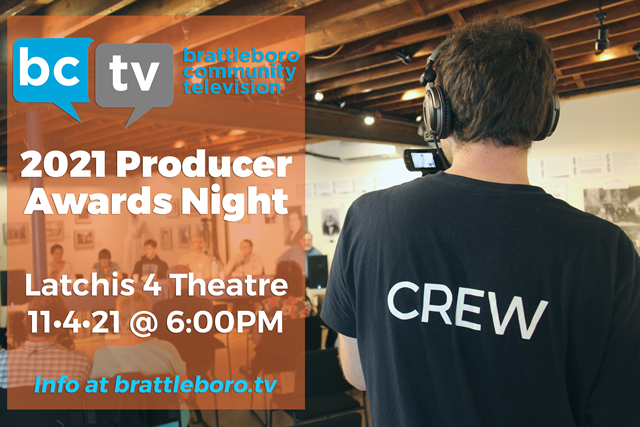 BCTV Announces the 2021 Winners of the Annual Producer Awards

The public is invited to the awards ceremony that will be held on Thursday, November 4 at 6:00 PM at the Latchis 4 Theatre in downtown Brattleboro. Food and drink will be served. Proof of vaccination will be required, following COVID protocols for special events at The Latchis. The award presentation will also be available on Zoom.

The following organizations and individuals will be recognized for their achievements from July 2020 to June 2021:

During COVID, Frederic Noyes and Erin Scaggs took on the technical challenge of livestreaming to Facebook and BCTV as they showcased Downtown Brattleboro's Gallery Walk for those at home by walking down Main Street and stopping in at galleries, shops, restaurants, nonprofits, and performance venues. They produced six inspiring episodes of “Gallery Walk Stream n’ Stroll'' between August 2020 to May 2021, when the public returned to downtown, with the September video garnering over 4000 views.

Like most conferences scheduled for fall 2020, the Brattleboro Literary Festival made the difficult decision to go all virtual - no easy feat with sixty author talks scheduled over three days. They also committed to producing the virtual sessions themselves for BCTV and YouTube!  Long-time leaders Sandy Rouse and Jerry Carbone coordinated author permissions and recording, while Jeff Mastroianni took on the editing. Over 30 excellent author talk videos were aired and are available to see here:

As superintendent of the Windham Central Supervisory Union, Bill Anton attends a lot of meetings covered by BCTV. As school boards changed formats and venues from online to hybrid, leaders were confronted with technical complexities while coping with extraordinary situations due to the pandemic. Even with his enormous responsibilities, Anton became known as someone who could be counted on to understand technical questions and problems and respond quickly. Fred Rogers’s quote: “Look for the helpers,” applies here!

Deb Paciulli, who serves as Trinity Lutheran Church’s treasurer, began using her iPhone to livestream services to Facebook in March 2020. One year later, she began adding titles and submitting videos to BCTV as a way to reach cable viewers. Trinity Lutheran now has a regular air time on Channel 1075. Paciulli provided a critical service to the church community with simple but effective video tools.

Producer of the Year: Andrika Donovan

In 2019, Andrika Donovan set out to produce a series about green (natural) burials and home funerals. After traveling to conferences in Florida and Minnesota for interviews and site footage, she did her final editing at BCTV, nearly finishing her project, until the station shut down. Undaunted, she checked out a laptop to work at home while receiving remote support from staff, and completed the project in February 2021. Donovan’s enlightening videos capture national pioneers of this movement as well as local stories and resources.

Series of the Year: SOLOs

Bahman Mahdavi was in the midst of directing a show with The Rock River Players when the pandemic hit. Mahdavi turned to fellow actor Jon Mack, manager of The Hooker-Dunham Theater, and SOLOs was born: a series of individual monologues filmed on The H-D stage, edited and premiered live on YouTube and BCTV. Mahdavi and Mack went on to co-produce eight episodes between November 2020 and May 2021. More than thirty actors were ultimately involved in the uplifting project.